The CBD and hemp conversation is extremely confusing right now, and perhaps nowhere more so than in a dialogue with e-tailing giant Amazon.

Amazon has taken an apparently clear position regarding CBD. Inconsistently with that position though, CBD might not be in the name, but it might be in the product.

Amazon has stated no products are allowed to contain “CBD” (Amazon Seller Central):

Supplements must not contain controlled substances, such as:

However, it is recognized that some Hemp Oil products or even more likely, ‘Full Spectrum Hemp Oil’ may be masquerading CBD oil. Conducting a search on Hemp Oil Supplement currently results in over 600 items ranging from books to capsules. Despite the apparent Amazon “ban” on CBD in its print position, a recent chat dialogue indicated that some of their people do understand and are communicating that hemp oil and CBD oil are the same despite the reality that no company has been allowed to say that except Amazon themselves. 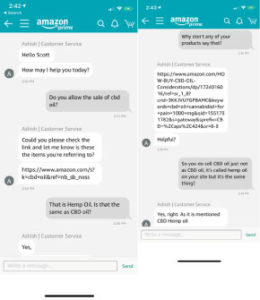 Another example of the confusion of the rules and regulations can be found by examining a certain pet supplement offering. Below, notice the similarity and differences of the Amazon offering on the left and the website branding on the right. It would seem this is special ‘made for Amazon’ packaging to get around the CBD rules: 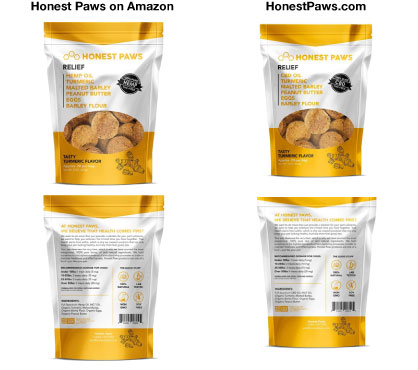 The only difference on the front or back of the package is the interchangeable phrases “Hemp Oil” and “CBD Oil”. There is no indication of how much CBD is included on either packaging. In another unusual twist, the product costs less as a CBD oil than a Hemp Oil and the product costs less on the website than on Amazon. Honest Paws confirmed in an email that the two formulas were identical, and each contained 5mg. CBD.

Is this skirting that line?

The bottom line is that the market place seems as confused as ever and even the retailers with a formal stance on the subject do not seem to have a firm grasp of what they are dealing with. Companies are taking creative approaches to get into the game and marketplace, often by being tricky and even opaque. We at Trust Transparency Center take significant exception to this and will keep trying to sort through both the confusion and the misdirection to provide transparency.

Executive Slime Disease is a preventable pandemic in supplements