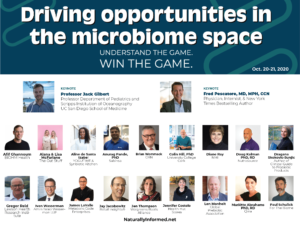 Paraphrasing my colleague Nathan Gray from a few weeks ago, when it comes to the microbiome – we don’t even know what we don’t know. That much and more was evident at the Naturally Informed Microbiome virtual conference produced by WholeFoods Magazine and Trust Transparency Center. It’s our third virtual conference, and the hallmark of all 3 has been an ‘off the charts’ speaker lineup, high engagement across the supply chain including especially suppliers and brands, and amazing sponsors both supporting keynote speakers as well as providing unique insights that translate into market success. One of the things that I’m truly impressed with is the contribution of our speakers, not only to their own sessions, but in their sticking around for other sessions, or coming on early to engage. It’s part of what we’re trying to accomplish as we build integrated communities.

As I listened to the presenters, I flashed back to the first Probiota Americas event held in San Diego 5 years ago, remembering the scope and scale of what was largely an emerging industry event, backed up with good speakers, but largely attended by a core industry group that I already knew quite well. The interest beyond that group was difficult to generate. Flash forward to today where professional interest in the microbiome has become so widespread and its influence on our industry, product development and consumer engagement cannot be ignored. Even our breakout ‘roundtable’ sessions were charged with engagement and multiple perspectives.

As usual with any event or conference I attend, here are a few musings rather than a true event synopsis. Highlighted general thoughts include:

Reviewing the Day 1 program from the event, seeing Jack Gilbert, followed by Colin Hill and later in the day Gregor Reid, well, it’s like watching a literal all-star game lineup.  Doug Kalman complemented the presentations by connecting the microbiome to sports and active nutrition, Dragana Skokovic-Sunjic talking about viable research models, and translating them into commercial applications, and Fred Pescatore taking a much more ‘holistic view’ of a complicated subject – it was just a phenomenal day.

The microbiome, personalized nutrition, and diagnostics are all interwoven, and will increasingly be so – that much we know for sure. Bringing this truly to the masses is still a way off, but according to Dr. Gilbert, imagine looking at your mirror in the morning, a scan is done that performs an analysis, and you get immediate microbiome advice to impact your health for that day, week, etc.

The term ‘postbiotic’ is just emerging into mainstream consciousness but is at low levels and not always with the same definition and understanding, making it ripe for confusion and exploitation. Dr. Colin Hill talked about the newly generated ISAPP consensus postbiotic definition (Preparation of inanimate microorganisms and/or their components that confers a health benefit on the host), clearly stating that purified fermentates alone or metabolites, like short chain fatty acids for instance, are NOT postbiotics according to this definition. He also commented on the fact that heat-killed probiotics really shouldn’t be called that since the probiotic definition clearly states that probiotics must be live organisms. Further, contrary to belief, Dr. Hill noted that postbiotics don’t have to originally be a probiotic in order to become a postbiotic.

Dr. Doug Kalman from Nutrasource recapped the current intersection between the microbiome and sports and active nutrition. Emphasis is on ’current’ as there’s a lot of work in progress and much more to be learned. Among the points of note that Dr. Kalman raised was the fact that there are numerous known linkages between diet and performance, many of which are thought or have been proven to be microbiome modulated. One example he gave was the fact that pea protein specifically increased levels of beneficial short chain fatty acids (SCFA).

It’s been a few years since I’ve heard our second keynote Dr. Fred Pescatore. With a tough topic, he began our event’s translation into workable messaging at the retail and consumer level with a presentation that talked about the microbiome as part of a more holistic diet and health solution. He discussed some food metabolism, prebiotic food sources, and suggested a broader definition and inclusion set for postbiotics than Dr. Hill had earlier. This is important in that it points out the challenge of an emerging and evolving field – we want to bucket lots of things that perhaps can’t be bucketed. And our consumers may have different buckets and may not even have created buckets for what we’re trying to tell them today let alone tomorrow.

Long-time microbiome guru Dr. Gregor Reid was next up, and further developed this point, talking about problems and solutions with pro and prebiotics including the definitions. He pointed out recent grossly misused and interpreted ‘science’, the need for ‘live’ bugs, efficacious doses, and the proper use and labeling of ingredients including strains. He concluded by presenting that while the health benefits can be evident, they don’t need to manifest as a supplement or even functional/fortified food. There are many natural and traditional food processes that can be further optimized to create microbiome supporting nutrition at affordable prices.

Deliberately, Day 1 of this event focused more on the science and technical aspects of microbiome function. Day 2 switched themes to discuss the market and communicating to it. Day 2 also included several panels as well as sponsored sessions. I myself participated in an opening session on consumer trends, indices, and behavior. What struck me in this session is that while some of the insights aligned, it is often through a synthesis of data with a pragmatic and knowledgeable eye that you glean a true perspective. CRN, NMI, and our Ingredient Transparency Center all offered both core data alongside insights and while all 3 standalone well and of value, there’s a certain synergy that exists by combining different data sets and filters.

The sponsor presentation from Sabinsa highlighted an important consideration in the ongoing study of microbiome modulation. Using curcumin as an example Dr. Pande from Sabinsa described how that nutrient, and in broader application, many other phytonutrients, are increasingly shown to have some of their activity manifest in the microbiome.

Other presentations on the second day dealt with the challenges of communications in a complex category, the regulatory environment, and the future applications of microbiome-related tech and treatments. Some panelists urged the audience to be disruptive in messaging, the role of science and optimal ways for communicating new science was debated, other nutrients like mushrooms as modulators were introduced, and the ‘echo chamber’ that is our industry was also called out. In order for us to be successful, we truly need to reach outside our bubble to a wider influencer base.

In the regulatory session, the challenging EU claims environment was discussed with a huge strategic takeaway offered by Boots Walgreen’s Jen Thompson. She noted that brands are using ingredients for which claims are allowed, such as vitamin C or zinc and immunity, or calcium and digestion to support the claim, then adding functional (microbiome modulating) ingredients that are identified and associative. She also pointed out the importance of product names, suggested that so long as it was well removed from the actual ‘commerce’, that education can occur across the EU, and observed that there was some inconsistency across the EU where labeling ‘prebiotic’ was concerned (e.g., Italy allows it). Ivan Wasserman, talking about the US situation noted the inconsistency of doing nutrition science while dealing with structure-function claim limitations.

Our panel on the retail/consumer interface discussed the impact of AI, personalization, and diagnostics on this conversation, and at one point it was suggested that perhaps retailers need to look at this in-store zone or operation as a service center, rather than a profit center.

Let’s face it, there’s a lot to unpack in a space that is evolving daily. From tech and primary research to the market is a long journey. We all know that simplification is one of the keys to success, but at the same time, over-simplification does a disservice to ongoing and deep research, but also, if done too soon in the process, limits category potential. As consumers and influencers get stuck in what might be an arbitrary box from which it’s difficult or impossible to dislodge them. Will consumers eventually understand that microbiome modulating products can help them manage stress, or are they stuck in the digestion box? That remains to be seen.

Len Monheit is the CEO of Trust Transparency Center

Who is Your Hero?

A Discussion of Drug and Supplement Power Duos