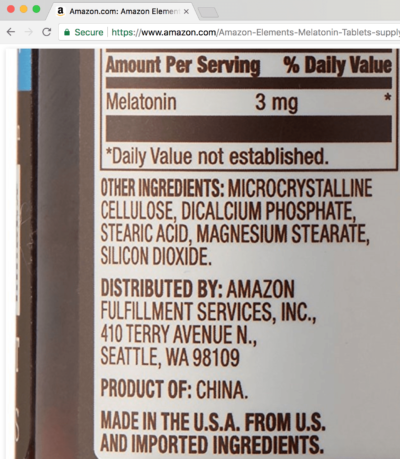 As the possibility of an extended trade war between the United States and China heats up and rhetoric flies, the dietary supplement industry finds itself in strange territory. This pending war could have a lasting impact on supply chains and pricing, but also on consumer sentiment. Some supplement ingredients could get caught in the crossfire, exposing true sources of supply. Are we ready for that?

Despite calls for more transparency in growing, sourcing and manufacturing, the supplements industry still is largely opaque, and is extremely so to consumers. Most consumers do not yet realize that a disproportionate amount of ingredients come from overseas. As we discussed several months ago, the Amazon Elements disclosure of biotin sourced from China, while supported for its transparency in disclosure, was not entirely welcomed by US consumers. Product reviews continue to call out the perceived negative.

Interestingly enough, the Amazon Elements label states “Product of China” but goes on to say the product is “Made in the U.S.A…”

And this is the tip of the iceberg. Many popular ingredients can only be sourced from abroad, and in some cases, only from China. And with that trade route under stress and possible price pressure, what will be the outcome? If an ingredient suddenly gets hit with a 25 percent tariff, how much, if any of that can be passed on and what’s the supporting story supposed to be? 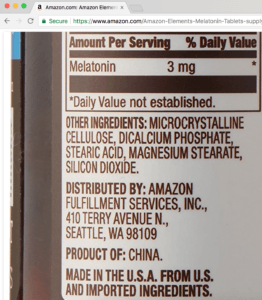 The current administration proposed list of 1,300 Chinese imports that will be hit with an increased duty of 25 percent on products from China include a number of dietary supplement ingredients, some of which can only be sourced from China, including several B vitamins and Coenzyme Q10. The list also includes hyaluronic acid and an ambiguous category labeled as ferments. Many ingredients do undergo fermentation and so the list of affected ingredients could be somewhat larger with more products impacted. It’s really not an option to say that the reason for any possible price uptick is due to a China import tariff. The market (and consumers) are not ready for that. So the two remaining choices are: absorb some of the impact, or directly pass it along to consumers with a different or limited explanation. I can’t see the first happening meaning that in most cases, the increase will impact shelf prices. One would suspect that at some point, this starts to suppress sales.

The CoQ10 Association has already announced that it intends to challenge that ingredients’ inclusion specifically, and it would be best for the category and for industry in general if that effort was successful. On a broader scale, let’s hope this trade war and its potential impact, at least for our ingredients, all comes to naught. However, the issue of disclosure of ingredient origins remains an industry challenge.

What the Natural Products Industry is Doing Right