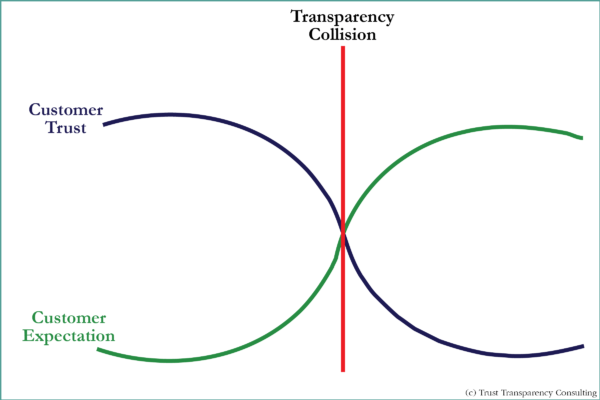 When expectations follow a trajectory different from reality it can be presumed a collision of trust and confidence will follow. Expectations of transparency by dietary supplement consumers and brand holders are increasing. Transparency of ingredient manufacturers in the dietary supplement industry is getting worse instead of better. Only multiple culture shifts will change the direction of an impending transparency collision. The problem exists inherently because ingredients are largely thought of as commodities and as such the origin and process of manufacture is less important. Ingredient quality is measured through testing rather than physical audits so only a snapshot of the ingredient at acquisition is assessed and the factors of process and production standards are often ignored. The relationship of awareness and interaction between ingredient manufacturers and ingredient purchasers has diminished instead of progressed over the past decade.

The expectation of transparency from the regulatory environment is also increasing yet the understanding from the ingredient manufacturers is not keeping up with the requirements. Few of the manufacturers are fully knowledgeable about the recent FSMA changes and the replacement of 21 CFR 110 with 21 CFR 117. Distributors and manufacturers alike are being held to a greater degree of responsibility with this replacement but progress of response has been slow to non-existent. The primary focus of the expanded replacement involves the application of the Hazard Analysis and Critical Control Points (“HACCP”) program previously applied to seafood, juice and retail/food and the FDA is now applying the program to the rest of the food industry including dietary supplements. 21 CFR 117 provides expansion of detail involving other sections of the previous part 110 as well as a creation of another set of record keeping requirements referenced as Hazard Analysis and Risk Based Preventative Controls “(HARPC)”.

This exercise of open collaboration is counter to what the consumer expects and what most brands portray. Consumers expect the highest quality standards possible for all elements of the products they purchase and certainly the ones they ingest. However, few brands perform the basic due diligence of verifying the authenticity of the manufacturer and instead rely on information provided through the distributor with little or no interaction with the actual manufacturer. Speak with almost any ingredient manufacturer in China and you find their knowledge of their customers is minimal and their interaction is similar. Physical audits by brand companies to ingredient manufacturers are typically relegated to a mere handful of companies.

The transparency collision at risk is not a Chinese problem or one that is the fault of the Chinese ingredient manufacturers; it is an industry problem allowed to exist because of the industry’s evolution and consumer idealism.