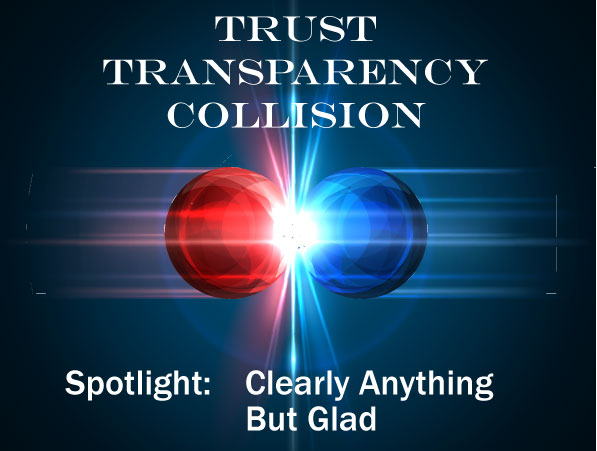 At Trust Transparency Center, we actively seek out best practices in corporate activity that support our premise that the proactive exercise and commitment to trust transparency has high ROI across many measurements. Conversely, trust transparency collisions can lead to consumer distrust so we try to raise awareness of them on an ongoing basis so others can avoid the same pitfalls.

Consider this scenario. You’re invited to the unveiling of a new menu at a local restaurant. The invitation states: “the Three Moons menu will continue its theme of honest, unpretentious and delicious food. Using interesting preservation techniques and fresh and seasonal ingredients (Still to be crafted with Jason).”

It turns out, that the food writers and influencers who were invited turned from ‘glad’ to mad (pun intended) when they found out at the end of the first seating that the event was actually to promote Glad plastic wrap and the food they were eating was three days old. For the second seating, Giant head chef Jason did disclose that it was to showcase Glad’s plastic wrap, but the damage was done and some influencers chose not to attend.

Marketing agencies hold events for brands all the time and what they did wasn’t wrong except for one thing—they didn’t disclose it was a branded event. There’s a clear difference in thinking you’re supporting a local neighborhood restaurant to in fact going to an event for a large national brand.

Giant did take a positive step and used the trust transparency principle in its public apology as posted to Instagram and in person:  (click here for the full post)

I would like to address the event that Glad hosted at Giant the other night. I would first and foremost like to apologize to anyone in attendance who felt like the victim of a “gotcha” moment or feels in any way that we were being deceitful. That was absolutely not our intention. We were contracted by Glad to test one of their products with our food. We went to their research and development facility to test the entire process which consisted of preparing food, sealing it, refrigerating it, and then seeing how it reacted after three days in the refrigerator. We tested and retested the pieces that we weren’t happy with. At Giant we consistently use preservation techniques such as packing proteins and vegetables in fat or oil, fermentation, and dry aging. These are things that we don’t often advertise because they sound weird and cheffy. That is not what we’re going for as a small neighborhood restaurant, but we are proud of our ability to build flavors on top of flavors as a result of exactly these “cheffy” techniques. We thought that we could use some of these techniques, wrap it in the Glad product, and the integrity of the food would remain intact. The premise, as we understood it, was that we would serve the food to people, many who the advertising agency had worked with before. They would come in, try it, and give their honest opinion. We never really thought that this would be a referendum on Giant, but more of a “see how good this plastic wrap is” sort of event. We were wrong. Once we became aware that a few people felt “punked”, we immediately changed our approach for the next seating and gave people the full details about how and when the food was prepared, preserved, refrigerated, and finished. I really, really wish we had done so from the outset.

Unfortunately, Glad’s agency FCB wasn’t as forthcoming in their apology. In an article in Adweek, the agency said: “The idea for the campaign is to put freshness to the test. We partnered with Giant to create a unique and special event where attendees could enjoy a great night and a delicious meal at Giant, and experience the benefits of Glad Press’n Seal, but in a way that had an element of surprise,” they added. “In order to get real and authentic feedback on the meal, we revealed Glad Press’n Seal’s role in the preparation process after the last course.”

This was a trust transparency collision by Glad, FCB Chicago and Giant. All three should have realized that disclosure was essential here. Had they been upfront from the beginning, they could have avoided the collision altogether. Instead, all three have received negative press and burned some important relationships. Glad especially seems to have totally overlooked the principle of Trust Transparency.

I’ve worked in marketing communications for a long time and it is critical to not mislead and to disclose. This is for both ethical AND legal reasons. The FTC sets rules for brands and influencers.  Be clear in your communication and trust that your concept and brand will carry the day.

Are we at peak microbiome? Not by a long shot … here’s why…