We most often hear about speed and agility as they relate to sports, but they’re essential in business too—especially business communication. If an opportunity arises, you need to jump on it. Paying attention to current events and trends can really help boost awareness and sales. Here are a few examples and why they worked. 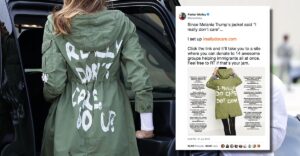 While in general we recommend steering clear of politics, we can’t ignore one journalist’s response to Melania Trump’s “I really don’t care” jacket.  Parker Molloy, a writer for Upworthy, purchased the domain Ireallydocare.com, created an image of a “I really do care” jacket which went viral and generated over $230,000 in donations to 14 charities that help immigrants. Regardless of what side of the political spectrum you sit on, you have to respect this strategic move and the agility with which this reporter moved.

Merriam-Webster Word of the Day

When it comes to the dictionary, trendy and relevant aren’t words you usually think of, but 189-year-old dictionary publisher Merriam-Webster found a way to re-invigorate its brand by posting a Word of the Day on social media. The Word of the Day generally ties to something happening in the news or a misstep by a high known personality. This has caused it to more than double its’ following on Twitter to over 720,000.

A passenger died on Southwest Airlines Flight 1380 after being partially sucked out a window of a flight from New York to Dallas. This was a tragedy, but also a case of a crisis response plan gone right. They stuck to their plan, acted quickly, communicated effectively with compassion,  and were cohesive with their messaging. The outcome was that the media focused on the heroics of the crew and the bonding of the passengers vs. the crisis. 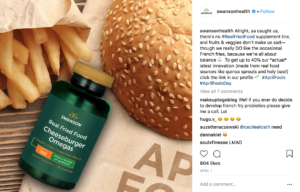 Supplement brands while health-delivering, aren’t usually thought of as edgy, but Swanson Health Products took a risk this past Aprils Fools Day and came up with marketing gold. To help support the launch of their Swanson Health Products and Real Food on April Fool’s Day, Swanson’s marketing, web and PR teams all worked together to create a tongue and cheek campaign that resonated with consumers and media.

These mystical creatures have captured cult-like attention on social media, especially Instagram. Nutrex Hawaii capitalized on this trend to raise awareness and sales of spirulina. They do a good job of commenting on and sharing Instagram posts on the topic and even posted a blog about it on their website and had retailers like Fresh Thyme jump onboard on their social media channels. 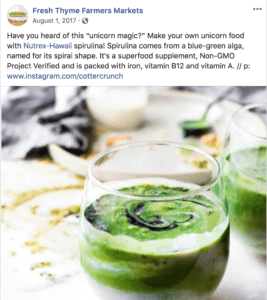 A few additional takeaways to take advantage with your communication efforts:

What things have you done to find success? Would love to hear your stories. Feel free to drop me a line at traci AT trusttransparency DOT com.

The Transparency Collision – The China Elephant in the Room