The use of vitamin C to bolster immunity goes back even before the days of Linus Pauling, to Hungarian biochemist Albert Szent-Györgyi, but the understanding of its benefits, even if the ingredient itself was not formally isolated and identified, goes back centuries. So it is with many ingredients, some, like elderberry, with their roots in ethnobotany, others, like zinc for which essentiality was shown in the ‘60’s helping folks from getting as sick in addition to numerous other health implications. The current cost of getting sick has resulted in the proliferation of approaches to give us every advantage possible to broadly support our immune systems with regimens that now include vitamin D and multivitamins.

Just where are consumers on their own immune journeys? Have they forayed past vitamin C? Have they made the connection between immunity and overall wellness? Recent signs suggest they may be getting there, especially as taking care of one’s immune system increasingly becomes non-seasonal and increasingly important as the stressors in our lives mount. Let’s look at what some of the consumer data is showing.

Trust Transparency Center’s Ingredient Transparency Center (ITC) conducts annual surveys to gain insights into consumer and health care professional perspectives on health concerns and how those concerns should be addressed for the supplement universe and in specific categories.

Starting with broad health attitudes from the 2021 ITC Insights Consumer Supplement User report of 1,000 US consumer supplement users, respondents noted anxiety and stress as a top concern (almost one quarter of all those surveyed). Insomnia and sleep problems was in the high teens as was depression, and while arguably related to a poor immune response, immunity itself was not a major concern, coming in at only 8%. This number did rise to 12% of those ages 36-45. While immunity wasn’t a top health concern, more than 800 respondents indicated that they did take a supplement to address immune health. Interestingly, 27% of those listed anxiety and stress and 23% listed lack of energy as key concerns, underscoring a key connection.

When asked what supplement ingredients they used to address their immune concerns, those ages 36-45 over-indexed against other age groups with vitamin C, vitamin D, zinc, and probiotics. Melatonin and elderberry indexed younger. Still 59% of the oldest users confirmed vitamin C, with a further 41% noting vitamin D.

The respondents were next asked why exactly they were taking an immune supplement, with illness prevention being the response of 38% who are taking these supplements daily – thus they qualify as regular users, not simply seasonal immune product buyers.

ITC investigated further, at a couple of points over the past 18 months asking both US and UK consumers (not necessarily users of supplements) what products they associated with immune health if they were to choose to purchase. Vitamin C was the top response in the US at 36%, while in the UK, the top answer was vitamin D at 40%. Probiotics, zinc, and elderberry rounded out the top 5 in both countries, but the rates in the US for those 3 were higher than in the UK. 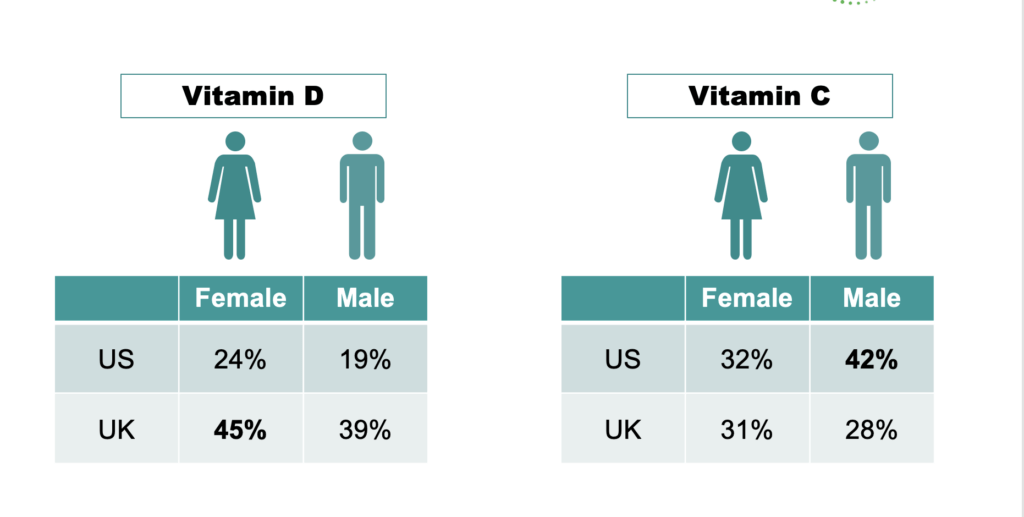 Interestingly, in the US, vitamin C use skewed male, vitamin D use, female. In the UK,  both skewed female, vitamin D slightly more so. There is certainly a lot happening in this category.

Join me at next week’s Naturally Informed Immunity: Mastering the Market virtual conference March 1st where I’ll be presenting the background to this data and other ITC Insights.

What’s Wrong with this Picture? Focus on Contract Manufacturing